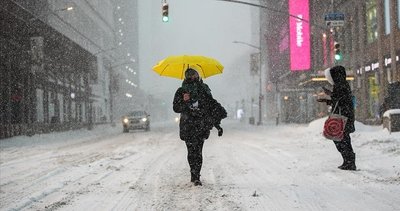 In a study, it was revealed that the harsher winter seasons in some parts of the USA are linked to warming in the Arctic.

According to the BBC’s report, scientists conducted a study examining the effect of warming in the Arctic due to climate change on the winter season in both North America and East Asia.

The research revealed that melting ice in the Barents and Kara seas is causing increased snowfall over Siberia and the excessive transfer of energy that affects swirling winds in the stratosphere above the Arctic.

The study reported that warming in the Arctic disrupted the flow of the circular wind pattern known as the “polar vortex”.

Thus, warming causes the vortex to stretch, which makes it possible for extremely cold air to reach the United States.

Experts speculated that the stretching process of this vortex in the natural current led to the deadly Texas cold wave in February this year.

Experts emphasized that the harsher winter season in some parts of the USA is associated with warming in the Arctic.

How to share photos without Internet on Android and iOS

What is it like to hear the sounds of Mars? Feel on the Red Planet with these recordings!