This Wednesday (1st) Apple TV+ released the documentary September 11th: In the President’s Office of Crisis, a production that brings a look at the movement and the first attitudes of the US government during the attacks on New York and Washington. The feature comes to mark the 20th anniversary of the attacks that left nearly three thousand dead.

The BBC production is narrated by Jeff Daniels (The Newsroom) and has as its main highlight exclusive interviews with former US President George W. Bush. It is from him and members of his cabinet, such as former Vice President Dick Cheney and national security adviser Condoleezza Rice, that the first actions are demonstrated at a time when the administration itself, as well as the public, are still trying to understand what was going on.

One of the documentary’s promotional pieces, for example, is focused on the exact moment when the former president is informed that what looked like an accident, after a plane collided with one of the World Trade Center towers, was a terrorist attack . The image became iconic after the leader is dropped off by agents among the children and in front of the press, with a worried expression, before leaving the place. 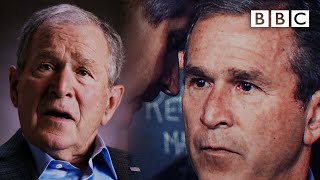 In addition to the interviews, September 11th: In the President’s Crisis Office brings unpublished photos and recordings of the moments immediately after the attacks, while the US government tried to act to contain the situation. The result is a look at the first 12 hours after the attacks, the first decisions and the impact of such an attack on the government and the country as a whole.

The documentary enters the Apple TV+ catalog after its airing on the BBC, where it premiered this Tuesday (1st). Adam Wishart is directed by the documentary series Panorama and Murder in the Car Park, also produced by the British broadcaster.

iCloud+ starts to reach subscribers of the conventional version for free