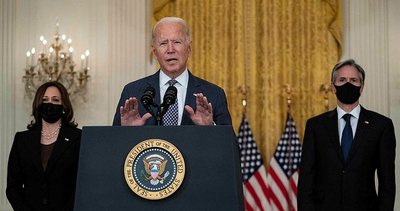 US President Joe Biden made striking statements about Afghanistan.

Highlights from US President Biden’s statements:

We sent 6,000 of our soldiers to Kabul Airport.

We don’t know how many Americans remained there. There were Americans using military assets. We work in close coordination. We work with NATO. We helped the French. Operations will continue. We will do everything we can.

We work under difficult conditions. I cannot say what the final result will be. As your commander-in-chief, I can promise to use every resource. I will do it out of respect for the US military. We are in contact with the Taliban. We try to fix as many problems as possible. This is what we told the Taliban. Any attack on our forces will cause a strong reaction. We answer, we said it. We know that many criminals are also released into the streets. We know what the Taliban and Daesh did. We will work with our allies.

We do not want terrorist attacks to be hosted. We worked with NATO in Afghanistan. I recently met with Johnson and Merkel. We agreed on this. We must take a co-ordinated and united stance at the G7 meeting. We are trying to bring health and food services to refugees. We are trying to put international pressure on the Taliban. The pictures we saw broke our hearts. There was an uncertainty. We cannot remain indifferent to these pictures. We have a mission to complete. 60 thousand American soldiers risk their lives at Kabul Airport. They are working to save the citizens.

I’m still in contact with the commanders there. I said we will help you with whatever you need. NATO members are on our side too.

I feel this responsibility in my heart. Now I want to finish this job. Pray with me for those who risk their lives. This is our focus right now. When it’s over, we’ll make the military withdrawal. And in 20 years we will be out of Afghanistan.

We entered Afghanistan for a purpose. Our aim was to rid Al Qaeda and we did it. We wouldn’t have entered if Bin Laden had not decided to launch an attack. It’s time to end this war. The cost of this war is 1 trillion dollars. The cost of this war was very high. Our goal is to destroy this tumor. Our allies agree with the decision to withdraw. We said that we should withdraw from Afghanistan jointly from now on.

To us, Afghans are important to us. There were those who fought with us. We try to remove NGO employees as much as possible. We will try to put international pressure on the Taliban. The Taliban are trying to gain legitimacy. We’re going to look at how he treats women and girls, his compatriots. Evacuations will end as of August 31, but this is an uncertain process.

Can you give assurance that there will be no terrorist attack from Afghanistan?

Of course, we didn’t know that in 11 days the Afghan leadership would collapse and the Afghan leader would flee. You ask if there will be a terrorist attack or an attack on the USA. We’ve seen it happen in other countries as well. As a result, we are able to deal with terrorist threats without a permanent military presence.

We made a deal with the Taliban. We draw our citizens to the airport. US citizens can pass when they show their passport.

There may be decisions that military commanders have to make, but I cannot comment on every decision. When the decision was taken, the 4 presidents before me had already said that they wanted to get out of Afghanistan. Why are we moving? Why are we withdrawing these soldiers? As I said earlier, Trump had a contract. One year has expired. The Taliban were taking over areas in the north and south. They were all over the country, if I had said that we were staying on 2 or 3 May. Would you believe? My son fought in Iraq. Would you send your son? It was necessary to reposition US forces. The eviction process has begun.

If we had decided 5 years ago, we would have stayed there for another 10 years. The scenes you see now would have happened. We are in a different situation. Things are going well. You can pass at the Taliban checkpoints when you show your US passport. We are thinking about how we can remove non-Americans, those who are not on the priority list, ordinary Afghans. There will be many Afghans who want to come to America. We came to an agreement. The only logical thing was to evacuate our soldiers.

Even though we were in contact with the Taliban during this whole process in Doha, we did not expect the Afghan forces to fall so quickly. They handed over Kabul to the Taliban. We thought that Afghan national forces would not leave the country.