The Panoramic Imaging Survey of Centaurus and Sculptor (PISCeS) project is aimed at searching for faintly glowing galaxies, such as ultra-weak dwarf galaxies (UFDs), considered to be “fossils” formed at the beginning of the universe. So, with observations from the Hubble telescope for the project, a team of astronomers identified a trio of dwarf galaxies associated with NGC 253, located approximately 12 million light-years from the Sun, in the direction of the constellation of Sculptor the Sculptor.

For the study, the team observed the region close to NGC 253 in search of systems formed by dwarf galaxies, and performed a visual analysis of the images obtained. As a result, they found five of them, three of which are considered UFDs. This indicates that they are less luminous and chemically evolved, in addition to having a structure dominated by dark matter. They are estimated to be around 12 billion years old, and almost all the stars they have were formed in the early universe. 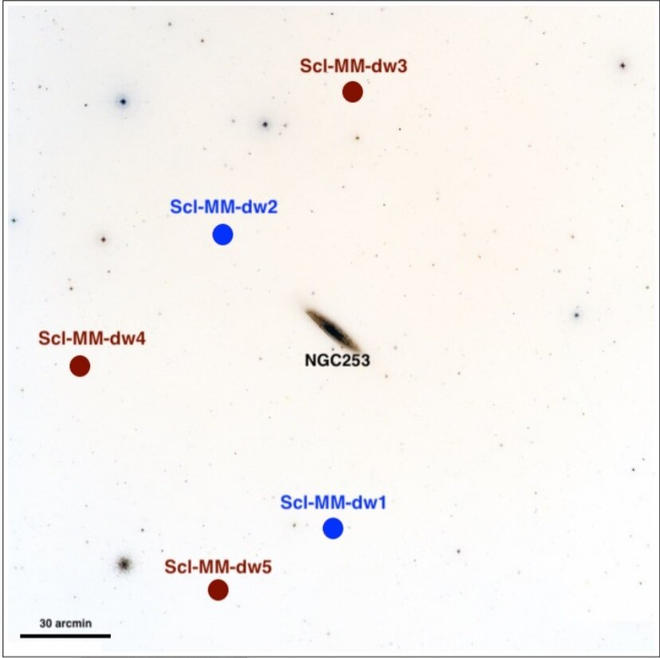 The position of newly discovered dwarf galaxies appears in red, while those of earlier discoveries appear in blue (Image: Reproduction/Mutlu-Pakdil et al., 2021)

Finally, we are left with Scl-MM-dw5, the largest and most massive dwarf of the three identified UFDs. It is 12.7 million light-years from Earth, has an effective radius of about 1,167 light-years and a mass that reaches 140,000 solar masses. This UFD is about 313,000 light years from the Sculptor’s Galaxy. The team estimates that the trio has a luminosity between -.75 and -7.24 mag, which places them among the weakest-brightness galaxies ever identified outside the Local Group, which is the neighborhood where the Milky Way is.

The article with the results of the study was published in the arXiv online repository.