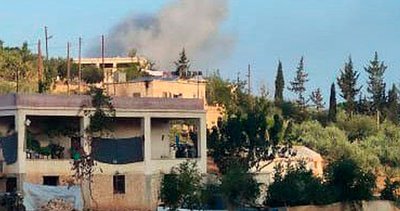 Five airstrikes were carried out with unidentified aircraft on the military headquarters of the Feylak Damascus group, one of the components of the Syrian National Army, in the Afrin district, which was cleared of terrorism with the Operation Olive Branch in northern Syria.

In the attack on the headquarters in the İskan village of Basuta town in the south of Afrin, no casualties were reported due to the fact that the SMO members were outside for training purposes.

Feylak Damascus, one of the SMO components, claimed that Russian warplanes carried out the air attack in his post on his website “almohrarmedia.net”.

Afrin district center was liberated from the terrorist organization YPG/PKK as part of Operation Olive Branch on March 18, 2018.