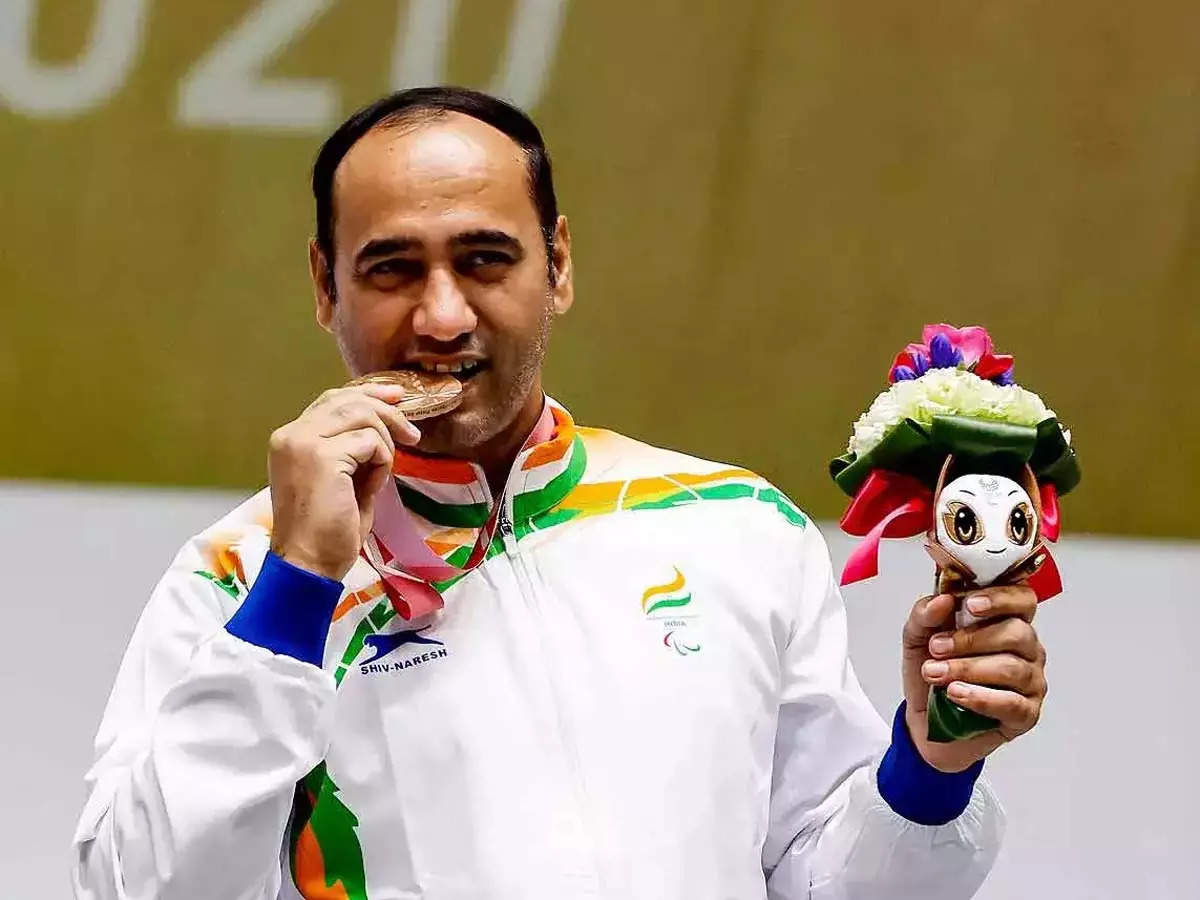 TokyoIndian shooter Sinhraj Adana won a bronze medal in the P1 Men’s 10m Air Pistol SH1 event at the Paralympic Games here on Tuesday, the country’s second medal in the shooting event of these Games. 39-year-old Sinhraj, who is suffering from polio and is participating in Paralympics for the first time, finished third with a total score of 216.8. He had made it to the final of eight shooters by finishing sixth. However, Manish Narwal, who topped the qualification with 575 points, could only finish seventh in the final. This is India’s second medal in shooting at the current Games. On Monday, Avani Lekhara created history by winning a gold medal in the R-2 Women’s 10m Air Rifle Standing SH1. With this medal from Adana, India’s medal tally in the Tokyo Paralympics has reached eight. Sinharaj struggled from the beginning to make the top three. His 19th shot didn’t feel right, leaving him behind, but his 20th attempt was a good one, while China’s Xialong Lou could only manage to score 8.6 points. However, China dominated the final. Defending champion Chao Yang (237.9 Paralympic record) won the gold and Huang Xing (237.5) took the silver. Sinhraj had slipped to the fourth position with a score of 9.1 but the Chinese shooter’s poor performance pushed him back to the third position. Singhraj, who hails from Bahadurgarh in Haryana, joined the sport only four years ago. He has also been the chairman of Sainik School, Faridabad. His grandfather was associated with the country’s independence movement and served in the British Indian Army during the Second World War. Sinhraj made it to the Paralympics by winning a gold medal at the 2021 Para Sports World Cup in Al Ain, UAE. Another Indian shooter who competed in the event, Deepender Singh, could not make it to the finals and finished 10th overall. Earlier, Rubina Francis finished seventh in the women’s 10m Air Pistol SH1 final. Rubina scored 128.1 in the final at the Asaka Shooting Range. Iran’s Sarah Jawanmardi won the gold medal with a world record of 239.2. The previous record (238.1) was in Rubina’s name. Rubina’s disappointing 6.6 in the first series in the finals made it difficult for her to make a comeback. She was, however, fourth after the first leg with a score of 93.1. The Indian shooter tried to make a comeback but could not make up for the initial mistake and became the second shooter to be eliminated from the eight women’s final. Earlier, Rubina had made it to the finals after finishing seventh with 560 points in the qualification. 22-year-old Rubina, who hails from Jabalpur in Madhya Pradesh, had set a world record in the finals of the World Cup in Lima, Peru in June. Rubina has a deformity in her feet since birth. In May, she was infected with Kovid-19 at the national camp and did not get a chance to practice for almost a month before the Lima World Cup. He secured a quota for the Tokyo Paralympics only after winning the gold medal in the World Cup. In the SH1 category, shooters hold a pistol with one hand. He has a disorder in one hand or leg. In this, shooters aim by sitting or standing according to the rules.

Round 6 could become the most watched series in Netflix history

After Google, Apple also wants to create an operating system for cars