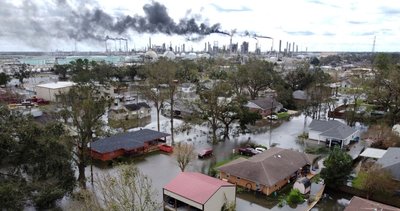 According to the first determinations, 1 person died in Hurricane Ida, which was effective in the states of Louisiana and Mississippi in the USA. The Mississippi River also flowed in reverse in the hurricane, which is estimated to have left more than 1 million homes and businesses without power.

According to the first determinations, 1 person died in Hurricane Ida, which was effective yesterday in the states of Louisiana and Mississippi in the USA. It was reported that the loss of life in question occurred as a result of a tree falling over a house in Ascension Parish in the Baton Rouge region of Louisiana.

While it is estimated that more than 1 million homes and businesses are left without electricity in the regions where Ida is effective, it was stated that it may take weeks to repair the electrical networks. While hundreds of homes and businesses were flooded due to the hurricane, streets and streets turned into a lake.

Ida made landfall on the 16th anniversary of Hurricane Katrina, which hit the city of New Orleans, Louisiana at category 3 level. Ida, which was the 5th strongest hurricane to hit the USA, later lost power and regressed from category 4 to category 1.

5,000 NATIONAL GUARDS ASSIGNED IN IDA AFFECTED REGIONS
In his statement, US President Joe Biden stated that 1 loss of life was confirmed and stated that it is “likely” that the loss of life will increase. Stating that more than 200 generators were directed to the areas without electricity, Biden announced that unmanned aerial vehicles and satellite images will be used to evaluate the damage caused by the hurricane.

Biden stated that 25 thousand debris removal teams are working in the region, in addition to the 5 thousand National Guard, which continues the search and rescue efforts.

Guardians of the Galaxy | Will Pouter Talks About Playing Adam Warlock

How do termites save rainforests in times of drought?

US agency authorizes and regulates the 1st sale of vapes; understand the limits