Events that change the continuity of the Marvel Universe and change much of what we know about the publisher’s heroes have already become routine in the comics. However, none of them promise to be as dark as Dark Ages (in a free translation), which gained its first glimpses in Free Comic Booky Day: X-Men #1.

Written by Tom Taylor and designed by Iban Coello, the saga promises to bring desperate moments against a threat capable of quickly defeating the most powerful names in the world. To prove this, the first chapter starts by destroying Iron Man, who doesn’t even know what brought him down.

The story begins in New York City, with the hero responding to a call from Pepper Potts after a massive earthquake hits the place. In the middle of his flight, Tony Stark is hit by green energy that shuts down his suit’s systems—seconds after contacting Captain America, he is hit by a plane that has also suffered a systems failure. 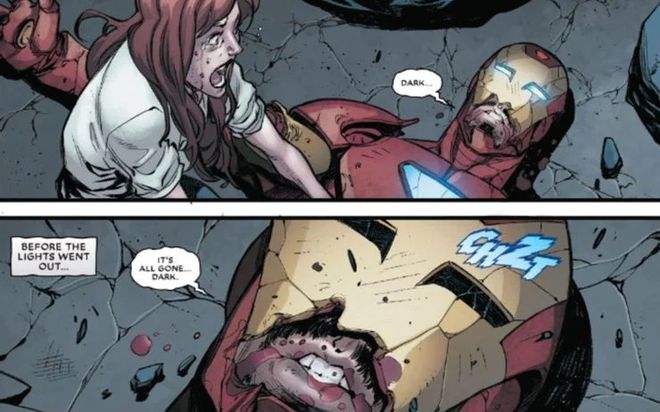 The final frame of the story shows us Iron Man without a leg, with his armor destroyed and several injuries. As he loses consciousness, Stark says “dark…it’s all dark…” before his suit runs out of energy, a situation that may have resulted in his death.

Dark Ages doesn’t take place within the official chronology of the Marvel Universe, which means Taylor and Coello don’t need to spare any characters — and, it seems, the massacre will have many more victims than Stark. The great villain of the story must be Unmaker, a giant with features that resemble the publisher’s celestials, presented in June this year in promotional artwork signed by Ryan Stegman. Check out the official synopsis of the event:

This highly anticipated limited series will see heroes from all corners of the Marvel Universe unite against a new threat — and fail. Their defeat will usher in an exciting new era, filled with heartbreaking losses and unimaginable risks. As the world is remade, fans will find fascinating new versions of their favorite heroes as they struggle to overcome insurmountable difficulties and restore hope to the universe.

Among the alternate versions promised by the publisher are an Iron Man with steampunk characteristics and a version of Spider-Man Miles Morales dominated by the powers of a symbiote. The first edition of Dark Ages should hit stores in the United States on September 1st and the saga promises to be completed with a total of six editions.

What is a supermoon?

The 7 Greatest Mysteries of the Human Body