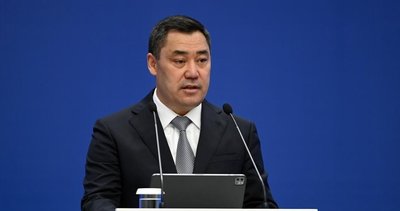 President of Kyrgyzstan Sadir Caparov met with ambassadors of foreign countries and representatives of international organizations on the occasion of the 30th anniversary of Kyrgyzstan’s independence.

In his speech, Caparov noted that Kyrgyzstan primarily focuses on the development and expansion of political, commercial and economic, security and military technical cooperation, and expressed that it is trying to make concrete agreements in the fields of water resources, energy, infrastructure, agriculture, health, education, culture, finance and technology. .

Caparov stated that his first visits as president to Russia, Uzbekistan, Kazakhstan, Turkey, Turkmenistan and Tajikistan are in question.

Noting that they agreed to further develop cooperation with strategic partners, allies and friendly countries, Caparov said, “First of all, we aim to develop closer cooperation with our neighbors in the Central Asian region and with the most powerful countries of the world, Russia, China, Turkey, India and Hungary, with which we have signed strategic partnership agreements.”

Caparov stated that currently Kyrgyzstan has established diplomatic relations with 165 countries and is a member of 124 international organizations.

How to prepare your PC to receive Windows 11

WhatsApp develops another tweak to increase privacy in the app

Dangerous asteroid approaches Earth this Wednesday (22). Is there a risk of collision?

Last minute: The world is talking about these frames! Escape from the Taliban in Afghanistan